skip to main | skip to sidebar

Hosted by R. O'Donnell and featuring the fine talents of Dawn Gathings, Kitty Gibson, Brook Hofpar, Jason Munford, Tobias De Vor, and special guest Amy McKenzie, The Boiler Room's premiere Poetry Scream was a screaming success. It confirms that the talent is here, right here in Port Townsend, and that one of the spots heating-up that talent is The Boiler Room.

The Poetry Scream, a fast-paced poetry reading whereby uncensored poets are unleashed at the podium, will continue every Last Friday of the month at The Boiler Room, 8pm sharp.

The Boiler Room is a non-profit all-ages venue for music, art, poetry, and theater. A youth-run business, The Boiler Room fosters a culture of volunteers and celebrates community, growth, learning and empowerment of youth and the young-at-heart. We are located in the heart of a small Victorian seaport (Port Townsend, Washington State) in the Pacific Northwest.

http://www.ptbr.org
http://poetryscream.wordpress.com
Posted by Richard O'Donnell at 3:11 PM No comments:

The Boiler Room is a non-profit all-ages venue for music art, poetry, and theater. A youth-run business, The Boiler Room fosters a culture of volunteers and celebrates community, growth, learning and empowerment of youth and the young-at-heart. We are located in the heart of a small Victorian seaport (Port Townsend, Washington State) in the Pacific Northwest.

This is a FREE event! 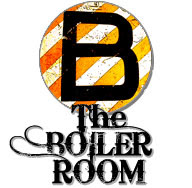 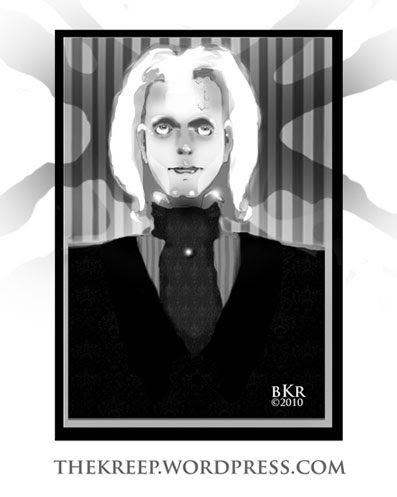 The city was named after my great, great grandfather Brazillia L. Kreep. The "L" for Lizzard, passed down through several generations. I am an author of dark ethereal poetry n’prose. Presently, I write Gothic poetry as well as many little illustrated books such as Kreeplets, Kreepy Krumbs, Kreep Sakes, and the novel Parenthia Ghoste.

Please visit my hauntings here or where'er my links will take you.

The Kreep Art
The Kreep Vampire Freaks
The Kreep Twitter
The Kreep MySpace
The Kreep Facebook
The Kreep Youtube
The Kreep Gothers
Posted by Richard O'Donnell at 7:51 AM No comments:

Labels: art, creep, creepy, dark, Gothic, illustration, poetry, The Kreep
On my other blog, The Kreep, I've been chronicling my poetry and illustrations for a new book of poems entitled Kreeplets.

Reprinted from the blog:

I believe, thanks to Parthenia's patience, I've manifested her at last. As a ghost, Parthenia has a very fine history and I do believe she is best served in the visual treatment presently pursued. It should be interesting to see where this artistic journey leads.

Post Script: I do miss the canvas and my brushes very much. 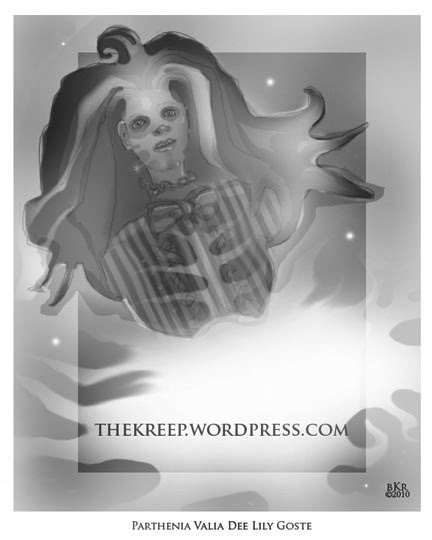 Parthenia Goste is a high-spirited poltergeist that haunts The Kreep

READ THE KREEP
Posted by Richard O'Donnell at 7:37 AM No comments:

Not too long ago, Gothic poet and illustrator The Kreep (created by R. O’Donnell) received an entirely handmade box of treasures collected specifically for him by the CORALINE team at Laika films. Inside the box, numbered 46/50, are highly decorated secret compartments that contain relics from the film including a bat/dog model, a bat body mold, authentic skeleton key with secret password, and a wing skeleton prototype #3. An old envelop with a wax seal with inlaid black button (as used for the eyes of the witch) and a hand-typed note explained the curious gift:

INSIDE THIS OLD BOX IS A ONE-OF-A-KIND COLLECTION WE’VE AMASSED AND CATALOGUED WITH YOU AND YOU ALONE IN MIND…THE PLAIN TRUTH OF THE MATTER IS, WE ARE PRETTY OBSESSED WITH DARK STORIES. LIKE YOU. WE ADMIRE YOUR DEDICATION TO THE KREEP. PLEASE KEEP UP THE SUPER WORK. WE’LL BE READING.

351 of the world’s oddest and most talented animators, artisans, and puppet fabricators have hand-made CORALINE. Led by Henry Selick, the director of THE NIGHTMARE BEFORE CHRISTMAS and JAMES AND THE GIANT PEACH, this team has created the first stop-motion feature shot entirely in 3D. Based on the beloved best-selling children’s classic by Neil Gaiman, CORALINE is a fairy-tale nightmare steeped in classic storytelling, craftsmanship, and the old-fashioned art of moviemaking magic.

CORALINE was nominated for an Academy Award for best Animated Feature. 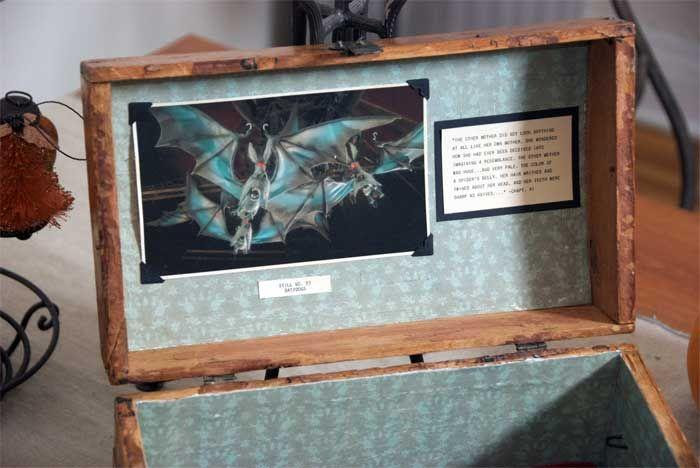 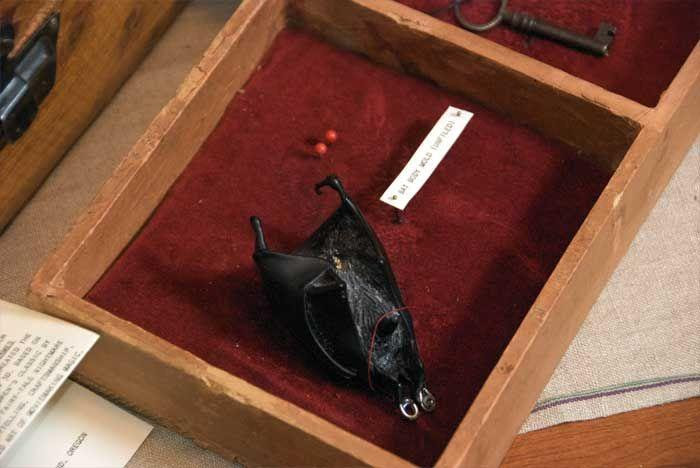 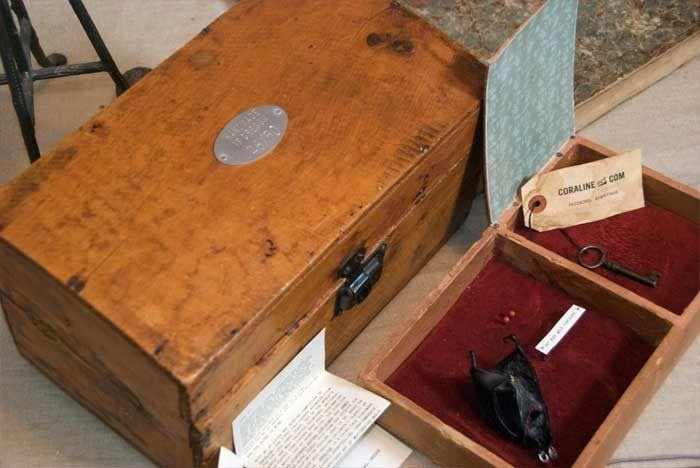 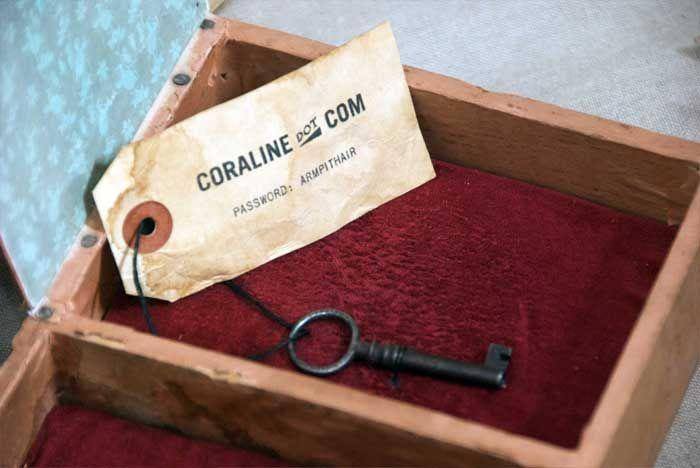 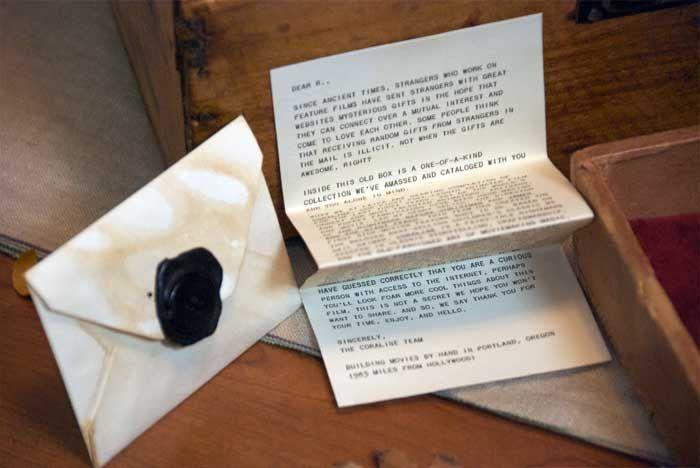 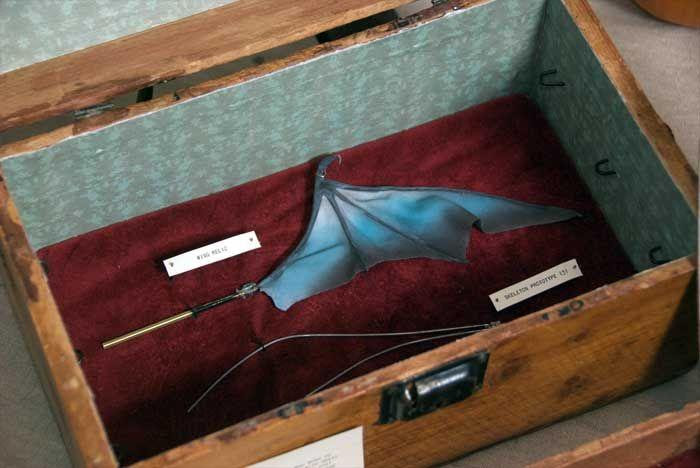 READ THE KREEP
Posted by Richard O'Donnell at 7:28 AM No comments:

Continuing my lessons in virtual art for Kreeplets, I painted n' penned a poem about surly twins. Here's a taste of art and verse.

Double Trouble, twins beware
How they loved a fine nightmare
T’wake an creep around the block
Hide in the shadows whilst they gawk 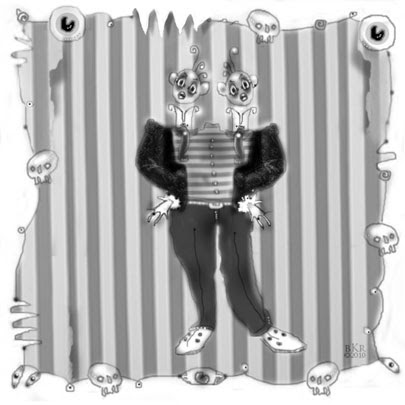 KREEPLETS WORDS
Posted by Richard O'Donnell at 7:20 AM No comments:

Writer Richard O'Donnell is a Kreep

That's right, writer Richard O'Donnell, known for the hit Off Broadway musical comedy One & One, Radio City Music Hall's A Manhattan Showboat, and co-founder of the New Age Vaudeville theatre company, the New Variety cabaret, and the R. Rated Chicago television show, is Gothic Poet and illustrator Brazillia R. Kreep a.k.a. The Kreep.

Parthenia Goste died in 1862, the very year that the Battle Hymn of the Republic was published, a smallpox epidemic broke-out in California, and the Internal Revenue Service opened its doors. She was from a family of means, her father having amassed a small fortune in the dry goods business, and was laid t’rest in Chasings Cemetery overlooking Lizzards Point. She was 21 years old and was buried with her favorite porcelain doll, christened Paje (Parthenia's nickname in real life). It was an eerie accessory in that it was fashioned by local artist Gabriel Whent t'mirror her exactly. 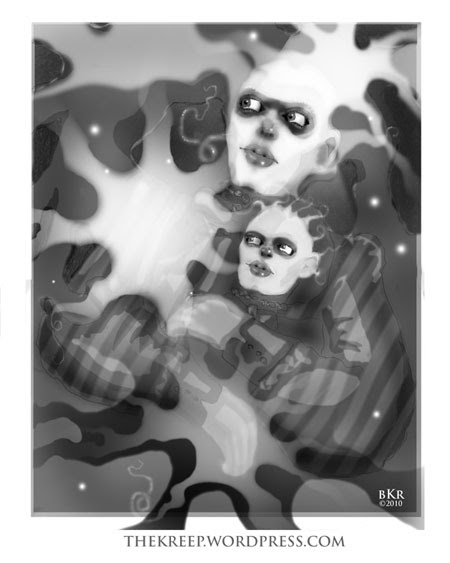 Parthenia Goste and Paje in her coffin - 1862 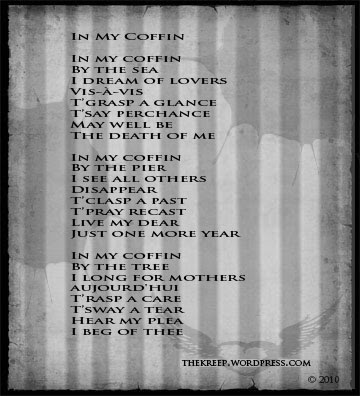 More Parthenia Goste
Posted by Richard O'Donnell at 7:13 AM No comments:

Richard O'Donnell
O’Donnell is an artist, poet, playwright, producer, actor, and stand-up comic. He has worked and lived in New York City and Chicago where he has written and performed for the stage and television. O'Donnell wrote the award-winning off-Broadway musical One & One, Radio City Music Hall’s A Manhattan Showboat, and co-founded the New Age Vaudeville theatre company, the New Variety cabaret, and the R. Rated Chicago television show.